I am devoting the month of June to being a guinea pig for a gluten free and wheat free diet. So I have started this ‘diary’ to help anyone else who might be interested in doing likewise. It’s important to note that I have NOT been diagnosed with any wheat allergies or celiac disease. Actually, there is no one to make such a diagnosis since I don’t go to doctors. :-) 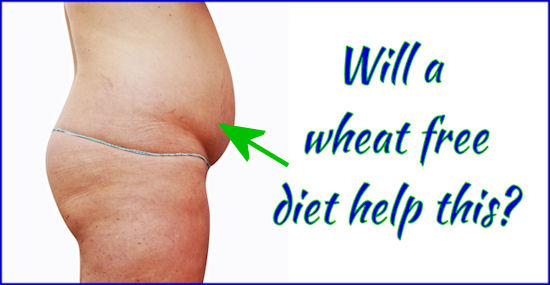 So why am I trying this new way of eating? Mostly because of some inexplicable symptoms that don’t seem to resolve themselves.

Do YOU Have Any of These Symptoms?

The book Wheat-Free Cooking** by Rita Greer has a great checklist of symptoms. Wheat is now thought to be the major allergen (allergy provoking substance) in the Western diet. Symptoms vary and may involve one or several of the following (the ones I have are highlighted):

* Why, oh WHY, can’t I lose weight? Don’t roll your eyes and say it’s because I eat too much (I don’t) or I never get any exercise (I do). Dr. Davis explains that his wife is a triathelon coach and that some of her students are up to 30 pounds overweight. How can a triathelon participant be overweight??? The old ‘calories in, calories out’ is an incomplete explanation.

2. Why do I become so exhausted every afternoon that it’s hard to stay awake?

Wow! Until I highlighted this list I didn’t truly realize how many symptoms I have – and I’m definitely healthier than most people.

The book Wheat Belly is actually quite fascinating. I was encouraged to try a wheat free diet because of the huge numbers of reviews of Dr. Davis’ book. I actually made a commitment on May 31, even though I hadn’t read his book yet.

When you think of wheat do you think of “amber waves of grain”? Tall, pale-gold plants waiting softly in the breeze? Well, according to Dr. Davis, if that’s your image – and it certainly was mine – we’re totally wrong. He says that because of genetic engineering, the wheat plant of today has very little in common with the wheat humans have eaten for thousands of years.

He explains that the wheat of today is only about 18 inches tall and is hard, rather than the softly flowing plants we imagine. The genetic composition of this plant has never been tested on humans and he believes that it’s deadly.

And the ‘beer belly’ that so many of us have isn’t from beer at all but from wheat, according to the doc, and he explains all the whys and wherefores of this nasty phenomenon that is so common today. Furthermore, fat around the abdomen is much more dangerous than fat on our hips and butt.

Do you know what got me interested in this book? A reviewer mentioned our grandparents generation and their physical condition. I started remembering old pictures and was astonished to realize that NOBODY was fat! Furthermore, nobody went to a gym and we didn’t see joggers and walkers on the streets like we do today. Imagine in June Cleaver putting on her Lycra and going to the gym. It just didn’t happen.

And, there were no fat kids in my school. Today, sadly, there are lots of them. Of course, there are lots of other factors. For instance when I was a kid, when we got home from school we dumped the books and ran out to play until our mothers made us come inside for dinner. We didn’t sit in front of the TV, a computer or video game console. Still, it’s very possible that Dr. Davis is on to something.

Dr. Davis believes in a diet that is similar to Atkins. He doesn’t object to lots of cream, butter and meat – but he does object to carbohydrates. I don’t believe that ignoring an entire food group is a good idea.

What helped me with this issue was the many reviewers who mentioned that they found substitutes for some of their most-loved foods. Dr. Davis is very hard on the gluten-free industry and doesn’t recommend their products. However there are two foods I will never, ever make for myself:

So far I have found substitutes that are delicious, gluten free, wheat free and convenient. I will share those foods and all kinds of recipes in future blog posts.

So What Have Been My Results So Far?

Well, I screwed up. Three days last week I ate English muffins that I thought were in line with the program. I was wrong. So basically, I started over about four days ago and so far I don’t have any startling results to report.

* It’s hard to describe but I feel more “peaceful” physically. That’s not exactly right but I don’t know how else to put it.

* I don’t feel so bloated. I don’t know if it’s actual bloat or if I’ve lost a bit of weight. I don’t own any scales and I don’t plan on buying any.

It’s early days on my grand wheat free diet but I’ve already tried some recipes that were delicious – and some not so delicious – that I will be sharing. And here’s the good news … it hasn’t been hard! If I were suffering, I wouldn’t be able to maintain this, even for a month. It does require more food prep and I missed pie on O’Charley’s Free Pie Wednesdays, but I can live with that.