The hCG diet plan is THE hottest diet in the western world these days – and no wonder because it can trigger weight loss of 1-2 pounds per day! In fact, it’s so powerful that it’s not recommended unless you have at least 10 pounds to lose … all you wimpy three or four pound people needn’t bother. :-)

hCG refers to a hormone called Human Chorionic Gonadotropin (no wonder it’s abbreviated with a name like that!) There are two reasons this diet is so wildly popular right now:

The weight loss is indeed quick. In 30 days you should certainly lose 15 pounds – and possibly as much as 40.

It will be much harder to gain the weight back because hCG repairs a lumbering metabolism and gets it moving again.

What Is This hCG Stuff Anyway?

hCG is a hormone that pregnant women are awash in. hCG appears in the urine of a human female 11 days after she’s officially pregnant and it helps the fetus to grow into a healthy little human. If you’re a man you don’t need to freak out at that announcement because you won’t start looking like a pregnant lady. Instead, you will lose weight … a lot of weight.

Where Has the hCG Diet Been For The Last 50 Years?

The hCG diet isn’t new. It was first discussed by an English doctor, A.T.W. Simeons. His hCG diet plan wasn’t extremely popular, though. It isn’t because it didn’t work. It was because it relied on natural hCG which was, as you can imagine, in short supply.

However, today we have a hormone created in the lab and the diet has received explosive attention due to a book by controversial Kevin Trudeau called ”The Weight Loss Cure”.

Some people have stated that the current discussion is unnecessary and that we should read Dr. Simeons work. Personally, I disagree because his work is very … well, medical.

“The so called stable type of diabetes involves the diencephalic blood sugar regulating center the diencephalon tries to meet this abnormal load by switching energy destined for the fat bank over to the sugar-regulating center, with the result that the fat-banking capacity is reduced to the point at which it is forced to establish a fixed deposit and thus initiate the disorder we call obesity. in this case one would have to consider the diabetes the primary cause of the obesity, but it is also possible that the process is reversed in the sense that a deficient or overworked fat-center draws energy from the sugar-center, in which case the obesity would be the cause of that type of diabetes in which the pancreas is not primarily involved. Finally, it is conceivable that in Cushing’s Syndrome those symptoms which resemble obesity arc entirely due to the withdrawal of energy from the diencephalic fat-bank in order to make it available to the highly disturbed center which governs the anterior pituitary adrenocortical system.”

OK, I’m being a bit hard on the good doctor but that’s a bit too overwhelming for most of us.

How Does The hCG Diet Plan Work? 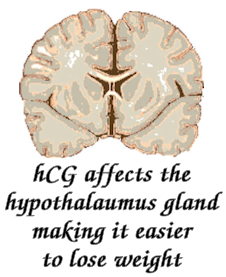 When our metabolism isn’t working correctly our hunger levels are affected. Our moods are also affected by the hypothalamus gland and our metabolism which means we could become ravenously hungry and the inclines to grab everything in sight and stuff it down our throat. It becomes harder to detect the difference between cravings of the brain and genuine hunger. I don’t know about you but many times I have thought I was really hungry until I stopped to really examine the cravings in my body. Often I am surprised to discover that I’m not hungry at all. But all too often I haven’t stopped to truly examine these feelings-instead, I just grab and eat. And naturally the foods that are handily available aren’t the most nutritious or the lowest in calories.

hCG helps the hypothalamus gland to work at its optimal best. This means this gland and all its associated hormones and cravings will be working for us rather than against us.

Initially, the only way to step up your consumption of an hCG was with injections. These are easily found at many doctors offices.

However, now anyone interested in the H. CG diet plan can take homeopathic hCG drops that will increase the body’s amount of hCG.

The original diet as promoted in by Dr. Simeon recommends the use of tea. Trudeau also recommends a tea – specifically green tea and chamomile tea. The point of extensive drinking of these liquids is that it will help cleanse the body, thus eliminating toxins and making it easier for the body to drop the extra pounds.

Fans of the hCG diet plan rave about the speed at which the weight is dropped. They also claim it doesn’t rebound and it gets them off the yo-yo dieting treadmill. The plan is inexpensive to follow and works for both men and women.

I don’t have any personal experience with the hCG diet plan because I don’t need to lose much weight. I do know that it’s wildly popular so if you’re interested in it, you can make up your own mind before trying it with our book, Ultimate Guide to the hCG Diet. The one thing that I’m VERY sure of is that you shouldn’t rush into the hCG diet – or any diet – without doing some investigation first. Just because your best bud loves a diet doesn’t mean it’s right for you.